We’re expecting an inch or two of rain in the next few days — we’ll see what happens!

Today I did some mowing in the garden in preparation for my imaginary pea and fava bean plantings. Maybe I can just sneak them in without a drip tape guide if it doesn’t rain too hard tomorrow(?). Then I mowed a path to the back gate. The wildlife path is super-hard and sunken, so hopefully getting some cut grass and rain on it will loosen that soil back up. I always fantasize that we’ll put woodchips on it. In very rainy winters the low spots get puddling.

This is not a very rainy winter. We have had 48% of normal for this point in the rain year, and 25% as much as we had gotten at this point last year! We’d had like 145% of normal rainfall by this point. Scary.

I’ve been trying to get more woodchips and some compost while the ground was dry (the delivery gate is at the back corner that’s visible in the above photo). I called back the company in Marin County that had flaked on returning my call “tomorrow” 5 days earlier yesterday.  They’re having trouble finding a truck with a transfer (so it can carry 2×15 yards of material) that is available because they are all busy doing fire debris removal. I don’t want my compost to come in a debris removal truck!!! But I guess it’s part of us all sharing the burden of the legacy of the fires(?). I don’t want to get compost from the place that’s like 3.5 miles away from us because it has a terrible reputation amongst gardeners (funny because they have a respected local small farmer writing their blog-type articles). I don’t want to risk having plants that seem to be suffering from herbicide damage (speaking of which, I found a wild brassica that looked like that today – maybe from the 32-degree nights?). Our trash company changed and now our green waste seems to be going to Vacaville, which is an hour or so away. I called out of curiosity to find out how much delivery of compost would be. Guess how much? $600. It’s around $255 from West Marin (CA DFA organic), and it was around that much when Waste Management was making its OMRI-listed compost in Novato. Argh!

This afternoon I got back out to the garden and collected my soil sample. There were places where the compost that I’d put on the surface had infiltrated 6 inches below the surface! Overall the soil was a bit too cold and wet for sampling with a shovel. It was hard to get a slice of soil and it was hard to break up the clods (peds) so I could take a small amount out. I’ll just have to bring in what I have when I’ve got the time. The place we send it thru is close to Z’s job in Sebastopol, but he’s so busy that I don’t think I’ll ask him to do it on a weekday.

Then I dealt with putting soil back on a low spot next to the driveway. By the end I could hardly move! So tired…

I haven’t been harvesting the peas – it’s time to get them out of there before the bugs decide to migrate to the strawberries. Ok, they’ll do that either way. They’ve reached the stage where every pea is trying to be a seed.

T and I started some seeds tonight – things like tomatoes, etc that most people would have been planting almost 2 months ago. I’m just kind of on my own late timeline. Someday I need to write something up about our cheapo starter greenhouse, but not today. Let’s just say that I take the trays out and leave them on a table in the sun because it’s too hot in there in the daytime. Tonight when I was putting trays away, I broke the clothespin that was holding the bird netting over the door. Sigh! At least the heat wave is ending.

Today Z mowed the area where I want to put the summer crops. First I need to deal with the pea bed and the Chesnok Red garlic. I can’t tell if it’s ready to pull or not. Most people either pull theirs or use a pitchfork. My soil is so hard that I have to dig with a shovel. I dig all around the plant and still usually end up cutting the bulb. Need to develop a better technique. Need to improve the soil!

The strawberries need fertilizing. I didn’t mulch them because 1. I never had the time, and 2. I wanted to compare the sow bug presence when there’s no compost on the ground. It’s a lot better, but the berries are VERY thirsty. They got 1.5 hours of water (through drip tape) yesterday and were dry today. I’m trying to go back to every other day watering as we come out of this heat wave. Gotta let those roots spread.

The cabbage and broccoli (or whatever) that I transplanted this week have had all but one leaf eaten off of them. There’s a thick layer of compost on the ground in that bed.

I did a bit of mowing along the blackberry patch that borders our driveway to make access this summer a bit easier. And, of course, also to check if they’re ripening. They usually start in the first few days of July, but… I harvested and ate 3! I need to figure out a way to hang the harvest bucket around my neck so I can use both hands.

My main method of preparing a garden bed for planting is to hoe the grass and weeds off, put down compost and ground oyster shell, and then lay out the drip tape. This spring I am finding that the bigger weeds such as dock and the big clumps of grass have to be dug out with the shovel. This adds a lot of time and bending over to the job 😦 I spent 4 hours preparing the 2nd half of my greens bed today. Maybe I can get the rest of my kale seedlings in before they die! And plant some zinnia seeds. I transplanted my few zinnia seedlings and my many dills into the top part of the bed earlier this week.

We are having a heat wave but at least the wind wasn’t too bad while I was working this morning and early afternoon. It is 10:45pm and the house is still 77 degrees!

On Monday I planted 2 varieties of chard (fordhood giant and perpetual spinach), 2 varieties of cabbage (1 green 1 red), and 1 variety of kale (white russian). Didn’t really add compost at beginning. Ground had been chisel plowed and raked ~2x and Z had put some compost in. I hate having the ground exposed like this. 1st plants may have drowned or gotten too hot from the ground/watering after planting. Have 8 more six-packs of greens seedlings. Will have to use 2nd bed. That stinks, because I have to hoe and rake it before I can plant there! 😦

There is so much debris in this bed! I don’t think it would have gotten digested if we’d waited another week… there are also hard spots where the soil has already dried out too much (or the plow didn’t affect it).

Here’s a strawberry I picked and ate this morning! Z picked a basket from the old berries tonight. 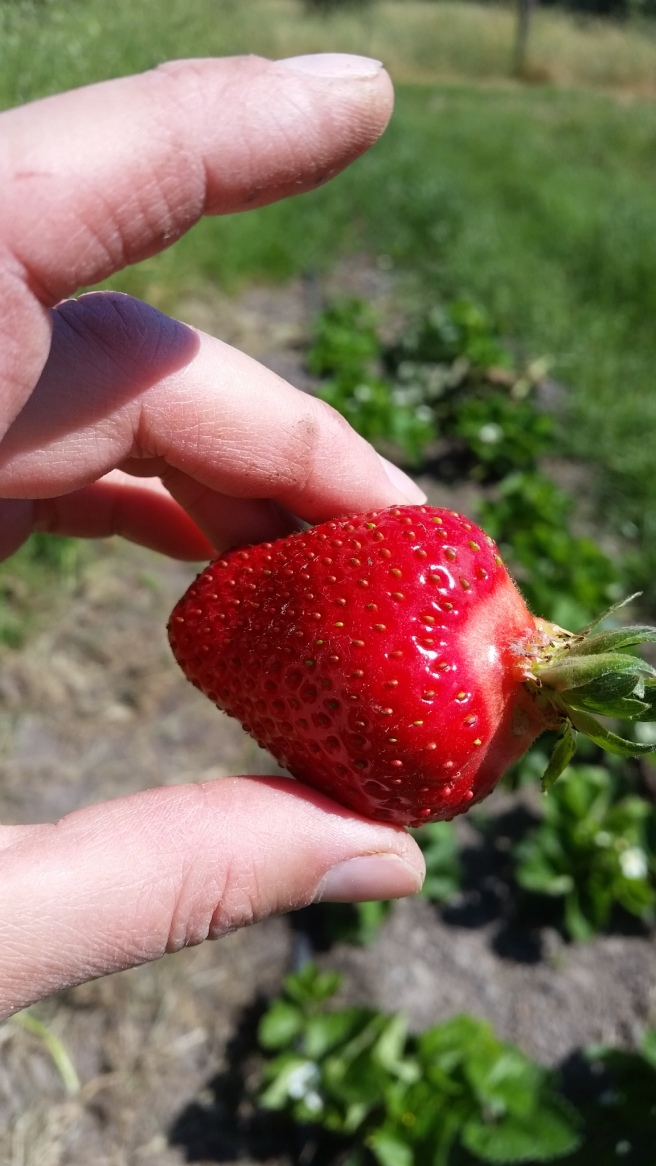 On Thursday morning I weeded one side of the Chandler strawberry bed, picked a basket of strawberries, and fertilized the old strawberry bed (kelp/fish). In the afternoon, T and I spread some green onion seeds out in the summer strawberries. That evening, T and I planted a packet of Dragon Tongue (Territorial, seeds from last year) and Painted Mountain Corn (Johnny’s). T is really good at using the jab planter that I still can’t quite get to work for me. If I can get him to plant in a line near the drip tape someday, I’ll be happy. If I can get that thing working for me, I’ll also be happy.

I then picked 2 more baskets of strawberries and pulled a bunch of old leaves and stems, rotting berries, and a few growing plants – oops – out of the bed. After that I turned the compost since I hadn’t done that in like a week. It smells so much better than a few weeks ago!

Z used the chisel plow on the 2 new beds yesterday

and he raked them Thursday. I have a lot of work to do by hand, though. He put in a loader load of compost but I’d like to have more in there. We’ll see.

Took pictures of a few bugs that were in the Chandlers:

that not a ladybug, is it? nah. something else.

I’ve spent the last few days’ garden time hoeing and weeding (mostly) the new strawberries. Work on removing old leaves continues in the old strawberries. For some reason I took this picture before I removed a bunch of grass at the edge of them:

We’ve been getting about a basket per day. The ones that I picked on Friday (?) were so delicious when we ate them on Saturday. Tonight we drank some frozen ones that Zak blended.

You can see that I overfertilized the summer strawberries:

After the .7 inches of rain we got on Friday I was hesitant to do much other work on the bedprep, and the last 2 days have been very windy…

I didn’t hit all the areas I wanted to apply Biomin 153 to last week, so I felt it was important to get out there with the fish/kelp mix today. Last week I ran out of time to clean out the sprayer, and I paid for that this week. I started to spray and a little bit came out nicely, and then stopped. I’ve twirled knobs and pressed levers, and I can’t get it to work! So I ended up pouring like 3/4 gallons at a time into a bucket (with a handle) and using it to apply the stuff. I refilled with some water here and there, and I think I still only got to 1 side of the okra.

Need to get on the corn-harvesting thing. And pick strawberries. And beans. And plant things!!! I also need to mow the old cover crops so we can get ready to plant strawberries and stuff in them.

Some of the sorghum-sudangrass is heading out, so that’s interesting. We’re wondering if either our mowers can handle the sections that are 5 feet tall… Also, those spots tend to correspond with leaks in the drip system.

We found one whole row that has sunn hemp in it. I scattered it along with other seeds in some of the other beds, but it definitely was not able to compete with those other cover crops. 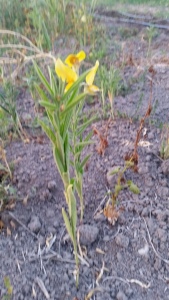