No, I haven’t forgotten about you. I’ve just been sick. Still. This cold is brutal, but at least it’s not the stomach bug that’s going around T’s school. Speaing of cold, it was 35 degrees last night, according to our wildlife camera, and we had our first rain today. Not a lot, just a few showers. A total of .15 inches, according to the weather folks.

I finished transplanting my old seedlings and got some more yesterday. Today I put a sixpack of collards and half of one of broccoli into the ground. Picked 5 ears of corn on my way out! Zak picked a lot of peppers – the padrons, I think, and the habaneros, and is trying to dehydrate them. He moved the habaneros out of the kitchen because the smell reminded him too much of getting burned from peppers.

Z did some mowing (mostly our yard and along the driveway, but also next to the corn, which is good because the western neighbors entered from that side last week and it looked terrible!) with the pushmower this weekend, and did some chisel plowing this morning while it wasn’t windy and it seemed that the rain was able to catch most of the dust. I want to get cover crops into the ground! It’s a bit early, but not if we are having an early winter (?).

This morning I made a list of the fall/winter cover crop seed that I have in the house. I tried to organize all of the seeds that are in the 2 containers, but I was there too long with T and he disorganized them. (roots, summer crops, herbs, flowers, and maybe lettuce/greens is how I organize them, with tons of packs of peas lying around, too)

Today while we were walking past the Himalayan blackberries along the driveway (with a septic guy), I checked to see if there were ripe berries. Just in time, since there are tons of ripe berries! I went out and picked maybe a basket’s worth or so with T. He ate and ate and ate them! I hadn’t realized that they were that far along. They are delicious. My inlaws had made it sound like they’d only gotten a half a basket on Tuesday. Now there are a lot more than that, and the photo shows a small portion of the closest patch to the house.

The wildlife is really starting to impact the garden- 4 broccolis have been affected by gophers in the last 2 days. One or two are still holding on, if sideways. I put the others into the compost. To work on for the future: bigger heads.

The raccoons dug up approximately 5 of the 8 little “mounds” where I planted pumpkin seeds the other night. Boo. 😦 Fortunately I have another packet. Z thinks I should wait another few days to replant, since the animals tend to dig on more than one night. Possible reasons for the digging: use of fish/kelp meal right as I was planting (so it wasn’t watered in for a period of time before I planted), and use of compost on the surface. There’s another gopher mound along where I planted the pole beans the other night. May need to replant that section.

Z got so much done today! He chiseled 11 beds (8 pictured) and then after I took this picture he got them most of the way raked. I am not happy about the “dust” that was blowing around. He was working while it was too windy. And yes, the soil was too dry.

Today I harvested: blackberries, kale, broccoli, basil, purslane, strawberries (ate in the field), and beans (three huge handfuls). T was excited to carry two of those handfuls of beans into the house! They sure get big quickly.

Z has an interesting idea: we could grow a bunch of things that local plant breeder Luther Burbank grew. Maybe some spineless cactus, Shasta daisies (need those for the strawberries!!), etc.

I’ve been keeping up with picking the Chandler and summer strawberries and some compost turnings, but little else this week. My little sweetie pie missed 3 days of preschool due to being sick. And he’s been clingy!

Today he and his dad went to the park and grocery shopping, and I got out to the garden. I picked a quick basket of berries, then fertilized: the  corn and beans, the new strawberries, the tomatoes, the greens, the potatoes, and the old strawberries. Yay! Then I hoed the mostly unplanted new sunflower bed and part of the one I planted some 10 days ago. I was on the phone with my friend who was complaining that it was 82 in San Francisco (she was driving with air conditioning on). It got up to at least 87 here while I was out there, and was 80 inside until around 9pm.

The broccoli raab bolted really fast and I need to pull it out. The dino kale and the one collard plant that’s left from the winter look like they are about to bolt :(. One of the tomatillos is really huge! The chandlers are, I think, starting to slow down. We have missed a lot of really good berries in the old patch. At the end of the evening I got to plant 10 or 15 feet of sunflowers with T (I think he put about 15 seeds into a deep hole he dug, lol) and I tucked in a few melon seeds, too. I shouldn’t have stayed out until 8 because that did not help him to get to bed. I think I’ve reached peak evening garden time (and thus garden quantity time) and have to start coming in earlier to try to help get him to bed earlier. I’d really prefer to always be outside at sunset. 😦

Today Z finished prepping for 3 rows of winter squash/pumpkins. He was working on chisel plowing a bed or two on the south side when he sheared a bolt on the chisel plow and bent the top link on the tractor! Photos are all his. He thinks that he can probably still use the landscape rake, lol. It’s probably not a good idea! File that under #ridiculousthingsthathappen

Today I started prepping one of the former summer cover crop beds, the one that is just west of the beans. I guess that it will be where I plant either the strawberries, or the garlic. It would be faster to do it by tractor, but then I’d get less exercise! There was a dip in the bed that I was able to fill in a bit using soil that had been left in a pile after one of us had used the landscape rake on a neighboring bed.

I kept trying to assess whether or not to put the seedlings that I bought into the 2nd east bed, which is currently weeds and bell beans, or not. I think I’m going to mow that bed and then hoe out plants in order to put in the greens seedlings that I bought on Sunday. I did some more weeding in the eastmost greens today. What a mess. No sign of the caterpillar (cabbage looper?) that I saw yesterday.

It’s amazing how I would never pay for greens that look like this, but I’m so proud to eat these ones! 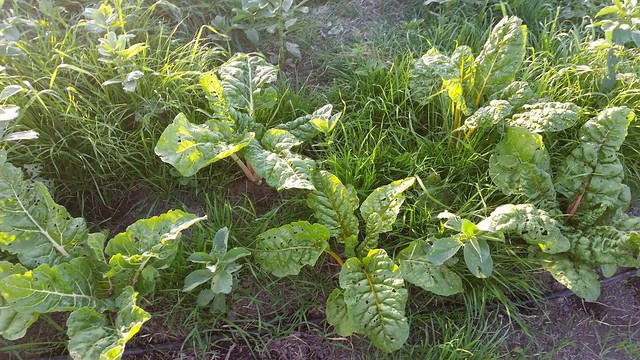 The raccoons have been digging again. I think I lost one greens plant in the last few days, and countless peas and pea sprouts have been dug up 😦 The camera is back up tonight. The other night Z happened to spot a raccoon climb in and out on the “H” next to the gate.

Oh, I’m thinking of planting bell beans in the last 10 or so feet of the pea row, since I don’t seem to be planting any more peas (it’s past the last recommended date for my area).