I think I spent about 4 hours in the garden today! I weeded the strawberries while Z and T ran some errands late this morning and early this afternoon. In the evening, I weeded those Chandlers some more and then put compost under the plants. (Sadly there are plenty of weeds still in the bed). I noticed that a lot of plants that had frost damage had exposed roots, and some didn’t seem to like having their leaves touch blades of grass.

Then I made sure to shift the compost that I started earlier this week (2nd shifting). I put a whole bale of straw out on the path down the middle of the garden and alongside/in the bed of summer strawberries. I’m starting to experiment a bit with using palm fronds as path mulch. I didn’t cut the fronds up at all, so we’ll see if they break down, get slippery, or work well to cover the ground. I put a bit of straw alongside the east greens.

Speaking of the greens, I noticed that the biggest leaf on my chard plant was wilting yesterday and tried tugging on the plant- yep, it had been chewed clean off of the roots. I harvested those leaves and put the plant back into the ground (I should probably try a different spot, though, huh?). There’s a plant that I threw out of the compost pile a ways back that seems to have rooted. We’ll have to keep an eye on that one! So out of 8 plants that looked so healthy and delicious months ago, I now have 0 plants in the garden.

Pest/IPM report: There was some strange poop near the strawberries. I’m assuming it was from a fox. There’s lots of digging from the raccoons everywhere. It’s so awful. I missed one cucumber beetle today and killed one other. There are plenty of slugs around if you’re out after dark and look hard enough. The plants are growing slowly — it’s been around and below freezing most nights recently.

I was hoping to do some mowing since the grass alongside some of the beds is getting to be annoyingly tall, but it’s just too wet. I think there is a sweet spot around 2 or 3pm some days when it’s sort of dry enough, but that’s naptime.

I’m not happy about the cracked soil that’s down below. Need to keep it covered, preferably with live plants. 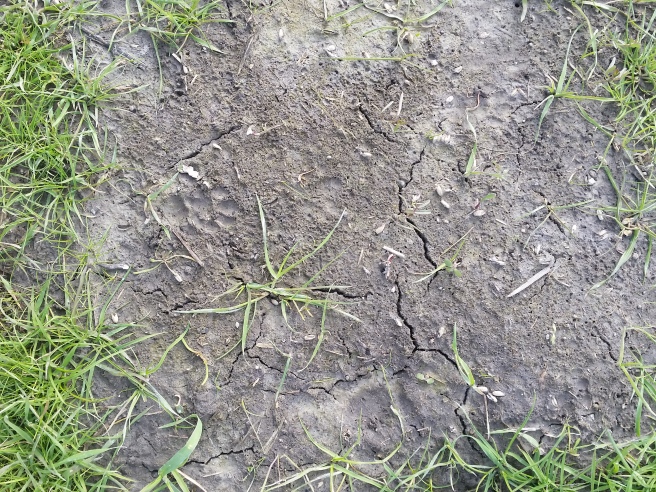